Cinnamon – why this spice must be a staple in your anti-cancer kitchen!

Avoiding and limiting sugar intake is a cornerstone of an anti-cancer diet, but is often related to feeling deprived. I have an answer for you that combines flavor with powerful medicinal properties that can firmly shut the door on cancer cells.

Enter CINNAMON, a beautifully sweet spice used for centuries in Traditional Chinese Medicine and folk herbal remedies, derived from the bark and oils from the leaves and roots of various varieties of tropically grown trees. Not only can cinnamon offer a different element of sweetness to a dish, but provides your body with potent anti-oxidant, anti-microbial, anti-inflammatory, anti-tumor, cholesterol-lowering and immune system regulating compounds.

The anti-cancer properties of cinnamon have been studied extensively over the years and the findings are mounting and deserve center stage attention. Polyphenol compounds in cinnamon have been shown to affect the expression of genes that cause an anti-inflammatory response and can prevent the growth and spread of cancer cells.

Angiogenesis is a process where cancer cells attract blood vessels to ensure their growth and survival using what is known as the vascular endothelial growth factor (VEGF). Cancer treatments have been targeting VEGF but unfortunately severe side effects limit anti-VEGF drug use. Enter cinnamon, as its polyphenols have been shown to act against VEGF with very little side effects, and a whole ton of pure delicious taste.

These same polyphenols have also been shown to induce a pro-inflammatory response in cancer cells, the tumor necrosis factor. TNF is a group of cytokines that can cause the cell death (apoptosis) in some tumor cells, definitely something we cancer survivors want to welcome in our bodies.

A compound in cinnamon known as the Michael acceptor trans-cinnamic aldehyde has been shown to be effective at retarding tumor growth.

At the same time cinnamon’s anti-inflammatory role is key to support phase 1 enzymes which help activate pro-carcinogens. Phase I enzymes play an important role in a process called “carcinogen bioactivation”. In order for the body to be able to eliminate carcinogens, phase 1 enzymes can activate pro-carcinogens that have an affect on carcinogens, thus rendering them ineffective, whereas phase II enzymes will assist the body with the removal of these carcinogens. The effectiveness of these enzymes depend upon numerous factors, and this is where diet, lifestyle, environmental factors and genetic mutations plays a role. Cinnamon can play an active role in the “carcinogen bioactivation”process.

Cinnamon also plays a role in suppressing the expression of other pro-inflammatory cytokines we do not want, such as the COX-2 group.

One of cinnamon’s most noteworthy properties is its ability to regulate blood sugar levels by improving insulin signaling and regulating appetite through two particular phytochemicals known as a chalcone polymer and couramin. Cinnamon also protects against oxidative damage from cancer-causing free radicals by increasing anti-oxidant related enzymes such as superoxide dismutase (SOD) and glutathione (GST), which play a vital role in healthy cell methylation and detoxification.

Cinnamaldehyde acts as a potent anti-bacterial and has been shown to inhibit the growth of the damaging H.pylori bacterial infection, while cassia has been shown to help ward off yeast infections. Its anti-microbial properties can destroy foodborne illness pathogens E-coli and salmonella, thus helping our gut microbiome stay on track and serve as the foundation for a strong immune system.

Epicatechin and cinnamaledehyde were shown to prevent the development of ‘tangles’ in the brain that are said to exacerbate the onset and symptoms of Alzheimer’s Disease. If that weren’t impressive enough, simply smelling cinnamon can assist in boosting brain functioning. Studies reveal that cinnamon contributes to a reduction in triglycerides, LDL (bad) cholesterol, and total cholesterol levels for those with Type 2 Diabetes as well as highlighting a correlation between cinnamon consumption and a decrease in blood pressure.

The research is abundant and proof of the power of cinnamon as a true example that food really is thy medicine. All of these benefits come from just a few dashes of cinnamon a day; so simple, yet so powerful.

Swapping cinnamon for sugar can do wonders for your health. Try adding a few dashes of cinnamon to your coffee. Or instead of those high sugar instant oatmeal packages for breakfast, whip up a big batch of this cinnamon steel cut-zucchini oatmeal (the zucchini will offer an extra serving of vegetables to your diet without altering the taste of the oatmeal). Make a large batch of this healthy and hearty breakfast on a Sunday night to enjoy throughout your busy workweek.

Instructions
1) Bring water and a pinch of salt to a rapid boil
2) Once boiling, add all ingredients to the pot and reduce heat to medium
3) Cook until oats are thick and fluffy (or too desired texture), approximately 25 minutes
4) Add toppings and enjoy!

When Is Conventional OK to buy?

Many of my clients ask me when is conventional food okay to buy. I’m Kirstin Nussgruber from http://www.kirstinscancercare.com I focus…
Read More 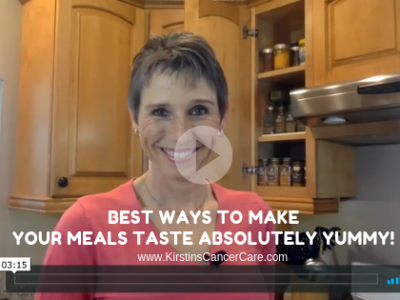 My goal is to get you back into your kitchen enthusiastically cooking really flavorful meals. One stumbling block that my…
Read More 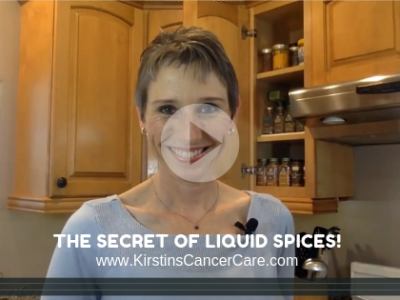 The Secret of Liquid Spices!

Would you like to spruce up that same old salad dressing? Would you care to know how to make those…
Read More