Sharing from the cancer-fighting kitchen The Mighty Watermelon 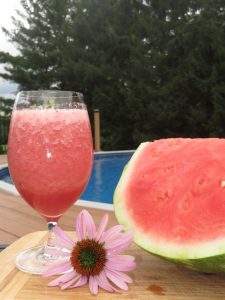 Think of summer and the image of a bright green and juicy red watermelon comes to mind. In our household, it is a staple, and we all have had our turns of indulging in this sweet and delectable fruit.

Not only is it really hydrating and just deliciously sweet, it offers quite a health kick too!

A member of the gourd family, the watermelon – which is a native to the Kalahari desert in South Africa – and seeing I grew up there this was some news to me too! – is actually related to the squash and pumpkins rather than the cantaloupe.

Although it has a really sweet taste, it actually has half the sugar of an apple – great news when we are watching our sugar intake, yet occasionally love to indulge in a sweet treat! Although it has a higher glycemic index value, it’s overall glycemic load is low due to its low calorie count, but high in nutrients, making it still a valuable addition to your seasonal summer cancer-fighting kitchen.

Watermelons are primarily… water, about 92% and thus serve as a great detox and diet food, helping your system flush out toxins and waste products due to its diuretic function.

It is one of the richest sources of lycopene, which is responsible for the bright red color also found in tomatoes, and exactly this phytonutrient is a potent cancer-fighting substance as shown in a number of human – not just animal – studies involving a range of cancers including breast, prostrate, colorectal and lungs cancers.

Other nutrients abundant in watermelon include high amounts of Vitamin C (besides being a potent antioxidant it is also used to make collagen which is a protein that gives our skin elasticity and strength) and Beta-Carotene (which turns into Vitamin A in your body and also contributes to healthy skin, eyes, and helps reduce damage caused by exposure to UV rays), Potassium (important in regulating our electrolyte water balance and proper nerve impulse transmission) and certain B Vitamins such as B1, B6, Biotin and Pantothenic Acid, which help with energyproduction and mood / brain support. 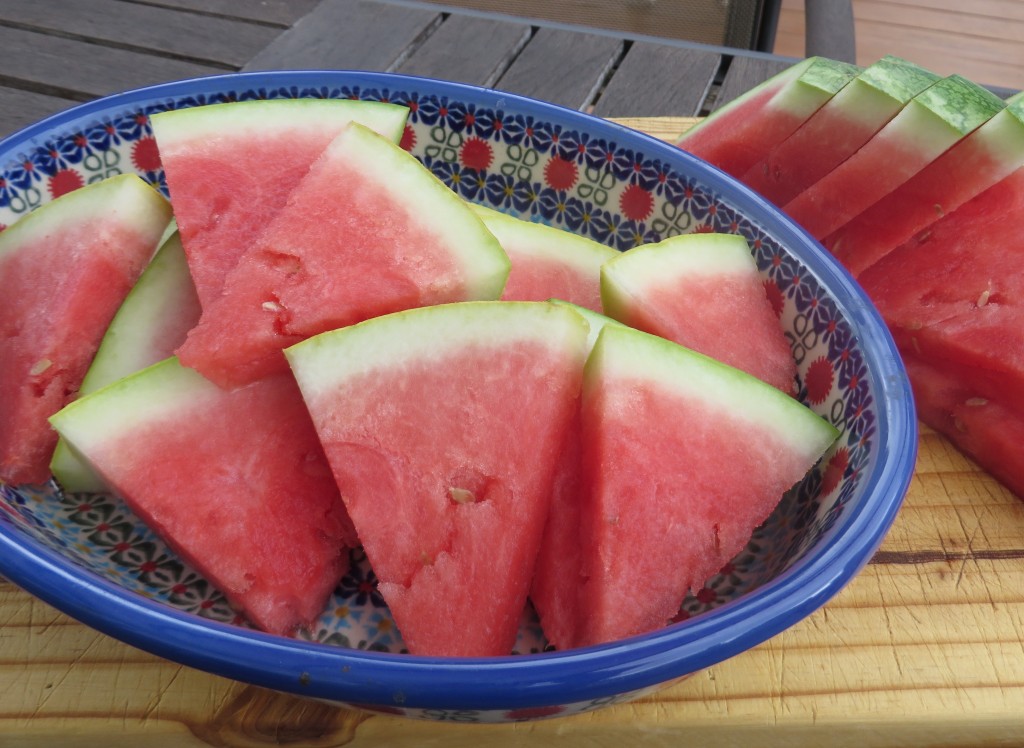 How do you know when it’s ripe? Thump it! If you hear a hollow ring, it sure is ready for you to sink your teeth into.

According to the EWG (Environmental Working Group), watermelons rank 26 out of 100 in terms of pesticide residue, so try and buy organic or at least make sure you do not include the rind when using conventional produce.

If you have a sensitive or impaired digestive system, always eat watermelon on its own, away from protein or carbs, as it digests very quickly and can easily ferment and cause gas in your system if it encounters foods that take a bit longer to digest.

Waiting about 20 minutes is long enough, or simply have it first thing in the morning, or even as a late night snack.

Stored at room temperature, it tastes even sweeter, although in mid-summer nothing beats a fridge-cooled version of this multi-tasking nutritional powerhouse.

Here’s a refreshing Smoothie we tried over the weekend, and I had to make 3 batches before everyone was satisfied!

a few leaves of fresh mint

Place watermelon into blender first. No need to add any water, but you may have to blend, stop and then stir a little at the beginning. The watermelon is juicy enough.

Add the remaining ingredients and whizz away.

To turn this into a green smoothie, just add a handful of spinach or kale leaves, and watch the color transform…looks quite festive.

A million ways to serve…

My family loves to gnaw on fresh, juicy, crunchy, triangular watermelon slices, but I also always chop up cubes and keep them in a glass container in the fridge, ready to use either as a hydrating snack or to pop into my Smoothie.

A really fancy way of serving watermelon is to use a melon scoop gadget, kind of like an ice-cream scoop, just smaller, and carve out little balls which you can serve mixed with mint leaves or berries such as blueberries or blackberries.